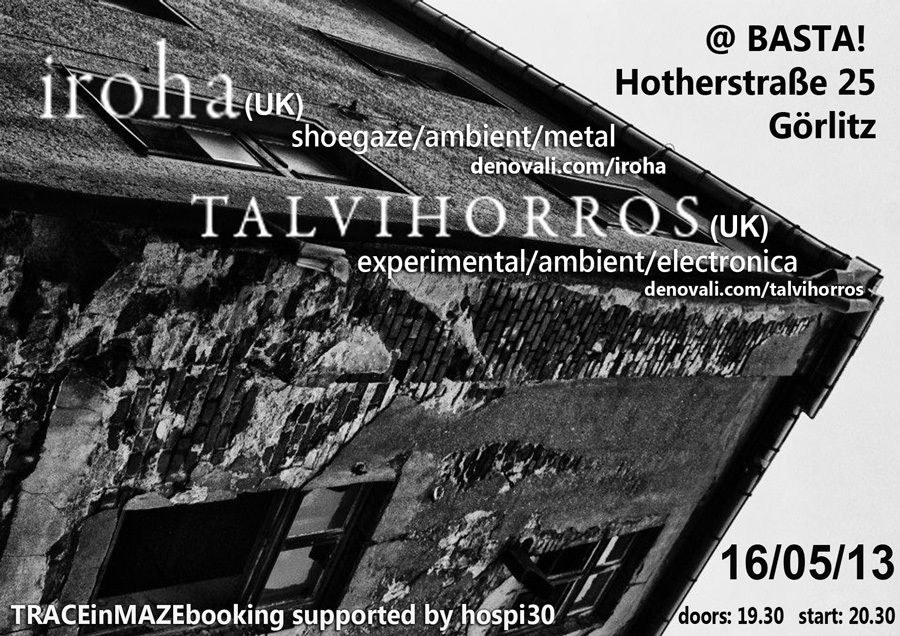 Birmingham based Shoegaze, Metal outfit Iroha are back with the follow up to their highly acclaimed 2011 self-titled debut album. Coming in December via Denovali Records, ‚Shepherds & Angels‘ is another heavy slab of densely melancholic and yet extremely uplifting songwriting combining elements of shoe-gaze, metal and electronica. From the opening, monolithic riff of ‚The Greatest Healer‘ through to the swirling atmospherics of ‚Denial‘ (a unique collaboration with Hydra-Head’s Pyramids), ‚Shepherds & Angels‘ is equally as heavy as lead and as fragile as glass. Andy Swan (Final), Diarmuid Dalton (Godflesh etc.) and Dominic Crane (The Boaty Man, Rumble Fish) have a great feeling for melodies and know how to combine them with powerful sound elements to create a fuzzy warm mood. Time to immerse.

Talvihorros is London based composer Ben Chatwin’s study of guitar and electronics. Numerous techniques are used to coax a myriad of sounds from both acoustic and electric guitars. Home-made and vintage electronic equipment are used to loop, process and manipulate improvised material into dense and dark sound collages.

What started out as a personal challenge to make an album in 7 days grew into something else entirely. Over a year in the making, and expanding his trademark guitar sound with drums, strings, bells, organs and synthesisers, ‚And It Was So‘ features contributions from fellow label mates Field Rotation (violin) and Petrels (cello) along with tour partner Jordan Chatwin (drums/percussion) and long time collaborator Anais Lalange (viola).

If last years album ‚Descent Into Delta‘ was reminiscent of plunging into the murky depths, his latest offering ‚And It Was So‘ evokes the expansiveness, dynamicism and density of the cosmos. Attempting to find order in chaos is something Talvihorros has been striving to achieve over the past three albums and he has never balanced these elements so beautifully.

‚Let Us Be Thankful We Have Commerce‘ was the inaugral, cassette-only release on London-based publishing house My Dance The Skull. It was composed as a response to the worrying grasp of consumerism over much of western society. Inspired by the first few Talvihorros live improvisational shows a small, primitave set-up consisting of guitar, mixer, casio keyboard, effects and percussion were used to create two long, vibrant and constantly shifting pieces. It now sees the light of day again as a limited 10“ rerelease via denovali records

Merging the textural noise of Tim Hecker with the psychedelic, guitar soundscapes of artists such as Barn Owl and Sun Araw.