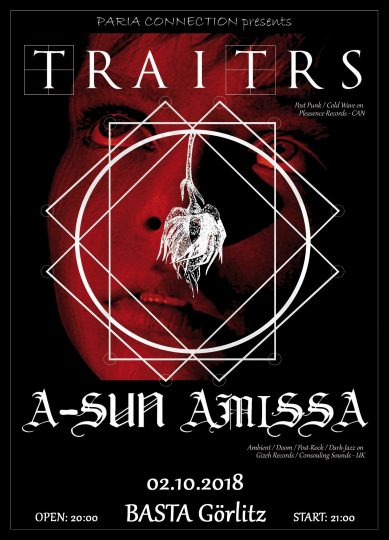 For its fourth full-length, A-Sun Amissa plunges deeper than before. Guitars come to the fore. Heavy, distorted chords are present from the off, complemented by desolate ambient passages of sound. The claustrophobic atmospheres remain but combine with a new density and sonic experimentation to present a huge leap forward in structure and composition.

Ceremony in the Stillness hints at themes from the previous three outings while very much pushing the project into new territories. The intricate nuances and lulling melodies from Desperate in Her Heavy Sleep (2012) reappear while the billowing guitars of You Stood Up For Victory, We Stood up For Less (2013) are referenced throughout. In comparison to 2017’s The Gatherer it’s clear there is a firmer direction in the song-writing as the album weaves through elements of doom, dark ambient and post-rock, placing its very own unique mark firmly into the ears of the listener.

A-Sun Amissa is the project of Richard Knox (founder of Gizeh Records and member of The Rustle of the Stars, Shield Patterns and Glissando) and while Knox takes the central role on Ceremony in the Stillness, again we see several collaborators contributing to the record.

Immediately upon finishing the European tour in support of their second EP, Speak in Tongues, Shawn Tucker and Sean-Patrick Nolan of TRAITRS began to think about how they wanted Butcher’s Coin, their first full-length album, to sound. “We’d talk for hours about certain albums that give you goosebumps, chills, a feeling inside that can’t be explained and we wanted to attempt that,” says singer/guitarist Tucker.
The result is a dark, mournful album that while still sounding like the bands early influences (The Cure, Sisters of Mercy) has a more industrial edge to it and surprising cinematic influences. “The concept is that the songs represent an old torturous house and the different hurt filled lives that lived through it for generations, like a collection of loosely connected horror stories. But as the writing progressed the album took a life of its own and became much more like John Carpenter’s In The Mouth of Madness where it played on your darkest emotions and what started as fiction soon the feelings became reality. “

FFO: The Cure, The Sisters of Mercy, She Past Away